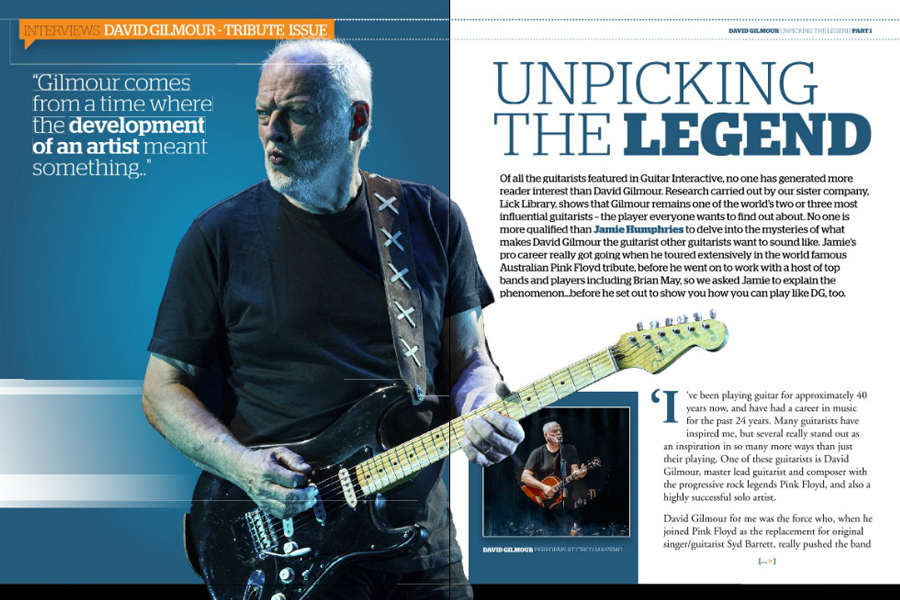 I'm sure that everyone has their own opinions and views about Gilmour, and I have probably overlooked some areas, but for me these were the things that set him apart from other guitarists; I guess also the sheer size of a Floyd show, it was an overwhelming experience. To wind things up I have a couple of things that really make my connection with Floyd special. Jamie Humphries David Gilmour - Unpicking the legend

Of all the guitarists featured in Guitar Interactive, no one has generated more reader interest than David Gilmour. Research carried out by our sister company, Lick Library, shows that Gilmour remains one of the world's two or three most influential guitarists - the player everyone wants to find out about. No one is more qualified than Jamie Humphries to delve into the mysteries of what makes David Gilmour the guitarist other guitarists want to sound like. Jamie's pro career really got going when he toured extensively in the world famous Australian Pink Floyd tribute, before he went on to work with a host of top bands and players including Brian May, so we asked Jamie to explain the phenomenon...before he set out to show you how you can play like DG, too.

I've been playing guitar for approximately 40 years now, and have had a career in music for the past 24 years. Many guitarists have inspired me, but several really stand out as an inspiration in so many more ways than just their playing. One of these guitarists is David Gilmour, master lead guitarist and composer with the progressive rock legends Pink Floyd, and also a highly successful solo artist.

David Gilmour for me was the force who, when he joined Pink Floyd as the replacement for original singer/guitarist Syd Barrett, really pushed the band into a different musical direction. The coming together of Gilmour and bassist/singer Roger Waters was one of those cosmic alignment of the stars moments, and although the two musicians clashed, with a somewhat volatile relationship (full marks for understatement there, Jamie! - Ed), the writing partnership of Gilmour and Waters resulted some of the greatest and best loved songs and albums in the history of modern music. Even today, years after the original line-up recorded together, their fan base continues to grow, with legions of fans flocking to see the solo outings of Gilmour and Waters. And then there's the catalogue of work that keeps selling and selling.

So what is it about Gilmour's guitar style that is so appealing? What is it that Gilmour has that still sees his classic solos topping polls in Rock publications? How is it that in a world full of hyper speed shredders Gilmour is still at the top of his game, and seems to be getting better with age? Like many of the rock elite