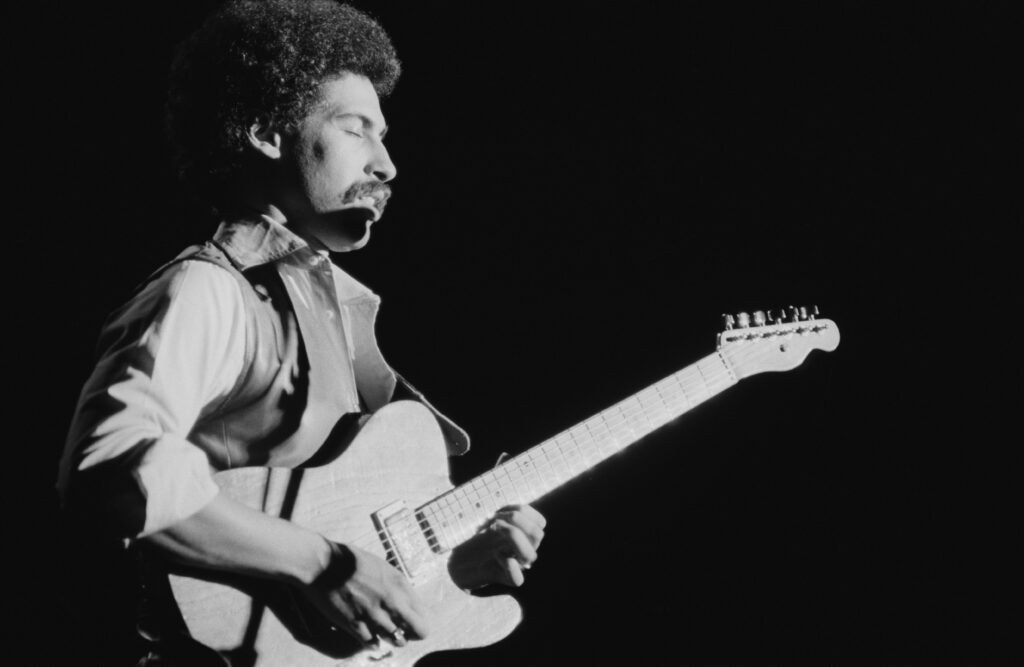 Forever the man behind the curtain, David Spinozza is a master session guitarist and composer. He has worked with Paul McCartney, James Taylor, Paul Simon, John Denver, Ringo Starr, Rod Stewart, Bette Midler, and countless other music legends. In this Guitar Interactive feature, we shed some light on a guitar player you're guaranteed to have heard many more times than you think.

In an illustrious career that has included him playing guitar for the greats, producing albums, releasing his solo records, and holding the first guitar chair in the Broadway orchestra of Hairspray. David Spinozza is one prolific individual. Just how prolific, I hear you ask? Check out his credited works. Just a warning: you'll be scrolling for a while.

Along the way, however, Spinozza has chosen to keep somewhat of a low profile, and doesn't even have his own artist website. Yet, in a recent interview with Guitar World, we have gotten an inside look at the guitar legend's beginnings and history. This interview is particularly interesting because, as much as it covers Spinozza's extensive studio session repertoire, he also notes his varying process in working with a multitude of musicians. He stated that Paul Simon was "a bit of a taskmaster," but also that "he knew what he was going for." He emphasized Paul McCartney's cuteness and creativity, John Lennon's ability to work quickly and efficiently, and his nuanced foregoing of a comment on Yoko Ono. His ability to adapt to so many different styles and creative processes attests to the fact that he can do it all and work with practically anyone.

A self-described "Fender player," Spinozza today still plays his trusty '51 Telecaster—just as he did in so many of his studio sessions over the years. His amp of choice is a Hot Rod Deluxe Reissue, as he likes small amps that can get that nice break-up without too much coaxing.

Spinozza received both formal and informal musical training as a kid. His interest was sparked by his fascination with Wes Montgomery records, which translated into him studying music theory in high school, as well as studying how to write for instruments. Spinozza's first studio session was at the age of sixteen or seventeen with Tommy Mottola, the future leader of Sony.

One of David Spinozza's earliest and most famous recording sessions was when he worked with Paul McCartney on Ram in 1971. Later in the year, he played guitar on Don McLean's American Pie, a track that he was never expecting to get radio play, as, at that time, most tracks were around 2 minutes 30 seconds—a stark contrast to the 8 minutes 37 seconds runtime of "American Pie." One year after that, he worked on Paul Simon with—you guessed it!—legendary singer-songwriter Paul Simon of Simon & Garfunkel.

Spinozza is also known for his amazing guitar solo on Dr. John's "Right Place Wrong Time," which peaked at #9 on the Billboard Hot 100 singles chart in 1973. He has a unique story as to how he got roped into playing for Dr. John:

"I was at the right place at the right time! I was at Atlantic working on a record with Roberta Flack or Aretha Franklin and Arif Mardin producing. I was leaving the session, a 10 to 1 to get to a jingle session, a 2 to 3, which is how we looked at them. Jingle sessions were only an hour.

So I was at the elevator, and Dr. John sees me in the hall and yells out, "Hey, Spinozza! I need ya to play a little blues for me!" They were mixing the record, and they forgot to put a solo on the song! So I explain I'm on my way to a jingle date and I only have 45 minutes to get there. So I went in and they had a little Fender amp mic'd right in the control room with them.

So they go to the middle of the track where they want the guitar solo, and I just play what I play. Then I go, "I know what you want. Let me try another one." They say, "You're done." And I'm like, "No! The guitar is out of tune." I over-bent a note that drives me crazy to this day. I was just bending my G string and then I was gonna tune up and do a take! They loved it. They threw me out of the studio. I remember leaving feeling very dejected because I could have played much better.

Cut to three months later. I'm in a cab on my way to a session, and I never heard the song. Never heard the vocals. So this song comes on the radio and the cabby must realize I'm a guitarist because I have three guitars. So he turns to me and says, "Oh, you're a guitar player, this is my favorite! You're gonna love this!" And it comes to the solo, and he turns it up, and I hear that it's me! So, knee-jerk reaction, I go, "That's me!" And he turns the solo down and says, "Yeah, right, buddy." So I never even heard it in the taxi. A New York moment!"

Later in 1973, Spinozza worked with another legendary member of The Beatles: John Lennon, on Lennon's fourth studio album Mind Games. He has stated many times over the years that he was honoured to have worked with both McCartney and Lennon, and didn't care to get caught up in whatever rivalry there may have been at the time. After working with McCartney and Lennon, Spinozza proceeded to play guitar for Ringo Starr's 1977 album Ringo the 4th, making him one of the few to work with three out of four Beatles, all separately of course.

He then proceeded to play guitar for and produce One-Eyed Jack and Ghost Writer by Garland Jeffreys (where he worked with Dr. John yet again), A Story with Yoko Ono, and James Taylor's Greatest Hits album. After working with A&M label with Garland Jeffreys, he released Spinozza in 1978, a jazz-oriented album with some vocals.

His advice to young, fledgeling guitarists that wish to become session players? Know both how to read music and how to play by ear, as both skills will be utilized. Ever the creative, with a rich history of collaborations to back up his talent, David Spinozza has been an integral component of the songs, so many of us know and love. Even though we may not know his name, we certainly know his sound, and for that, Spinozza has left his mark.

Once live music returns to the world, you can catch David Spinozza performing with his band from 1973 called L'Image, featuring the fellow greats, Tony Levin, Mike Mainieri, Steve Gadd, and Warren Bernhardt. Spinozza is also currently offering lessons on MeetHook.com

With the upcoming launch of MeetHook Live, David has put together a Big-Band Beatles project he will be debuting in the coming months. Head to MeetHook.com for more information.