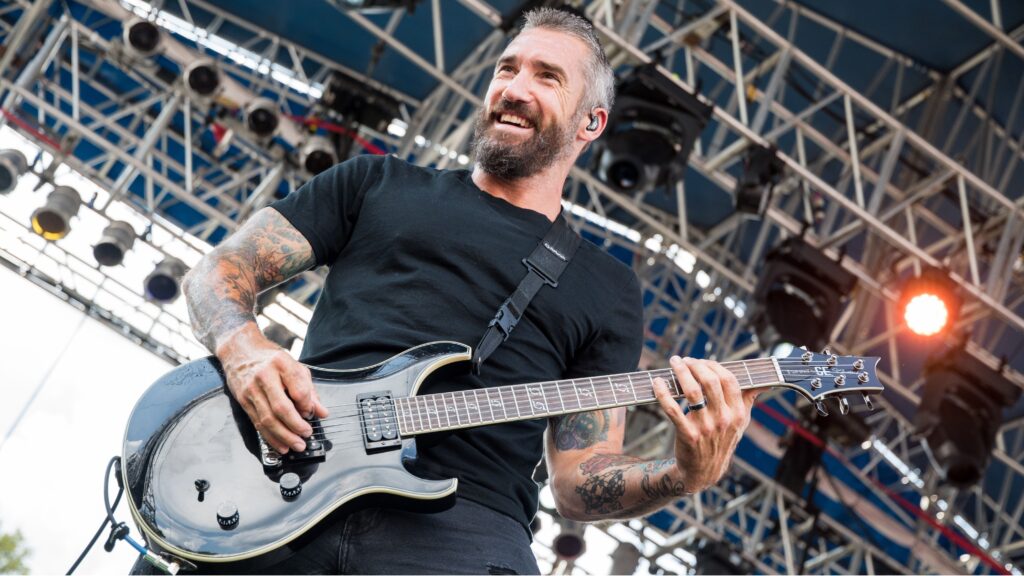 Just when you had decided that absolutely nothing good could come out of 2020, Sevendust comes to our rescue with their superb, and hotly anticipated new release 'Blood & Stone' — out now via Rise Records. Sevendust's lead guitarist Clint Lowery talks with Gi editor Jonathan Graham about the band's latest release, hardships and inspirations throughout this troubling year and much more.

Sevendust has built its legacy from records and live stages left soaked in the band's blood, sweat, and tears. Since their formation in 1994, the Atlanta, Georgia, based hard rock act has delivered 13 (counting 2020's 'Blood & Stone') studio releases, including the three gold-certified albums — 'Sevendust' (1997), 'Home' (1999), and 'Animosity' (2001) — selling over three million records worldwide in the process. 'Seasons' (2003), 'Cold Day Memory' (2010), and 'Kill The Flaw' (2015) each broke in the Top 15 of the Billboard Top 200, with the latter's lead single "Thank You" receiving a nomination in the category of "Best Metal Performance" at the 2016 Grammy Awards; a career first for the band. For over two decades, 7D has sold out countless shows across the globe and lit up iconic festivals such as Sonic Temple, Ozzfest, Shiprocked and Woodstock!

2018's 'All I See Is War' earned some of the best reviews of the group's stellar career to date. Energized by this particularly prolific and positive period, Sevendust reconvened at Studio Barbarosa with Michael "Elvis" Baskette (Alter Bridge, Trivium, Slash) during late 2019. Fresh from 'All I See Is War' and respective solo outings, with Clint and Co firing on all cylinders. The hard work that followed produced the explosive 'Blood & Stone.'

"From the pulsating intro of opener "Dying To Live" to the album-closing cover of Soundgarden's "The Day I Tried To Live", Sevendust continues to push the sound it has made their own for more than 25 years."

From the pulsating intro of the album-opener "Dying To Live" to the closing cover of Soundgarden's "The Day I Tried To Live," Sevendust continues to push the sound it has made their own for more than 25 years. Tracks like "Love," "Blood From A Stone," "Kill Me," and "Against The World," showcase why the band has been adored by fans and critics alike. Lajon Witherspoon, Clint Lowery, John Connolly, Vince Hornsby and Morgan Rose have once again raised the bar with 'Blood & Stone.' The new music fits perfectly alongside the band's most seminal tracks and are sure to become the cornerstone of the band's live performances once normality resumes in the live music scene.

"I think this is one of our strongest records in a while," Lowery states about the new Sevendust release. "I'm proud of all the music we do. Every band likes to say, 'Oh, yeah, the new record is the best one we've ever done.' I think it's a very reflective record for where we're at musically, where we're at as a band. So that's always a goal. I think we just wanna be genuine. We don't want to put out a dud record. Not everyone's gonna like it; we understand that. We just try to do what we do best. We're not the heaviest band in the world; we're not a pop-rock band at all either. We're just this aggressive band that has our own thing, and we stay true to that."

Not only do 7D stand strong together, but they continue to come out swinging as a raw, real, and relevant force ... and that statement applies to each member's side projects. When the band aren't recording, or on tour, they are usually keeping busy writing or recording music. In 2012, Clint Lowery released a CD with Morgan Rose on drums called 'Last Parade' under the side project Call Me No One. He also released four EP's under his self-titled Hello Demons Meet Skeletons from 2008 to 2013. Clint has produced albums for Revolve and Three Years Hollow, among others, and even spent part of the summer and fall of 2017 playing guitar with Seether on their tour.

Lead vocalist Lajon Witherspoon quietly released his solo track "Love Song" in 2017 shortly after a tragic shooting in Las Vegas, Nevada. He is reportedly working on material for his first-ever solo album.

Drummer Morgan Rose has also produced albums for Candlelight Red, Neverset, the Infinite Staircase and other bands. Morgan has played drums on albums by Eye Empire, the Infinite Staircase. Ghost Embrace and the side project Le Projet. In 2009, he notably filled in for Motley Crue drummer Tommy Lee and Korn drummer Ray Luzier for several shows. Rose recently announced his debut solo EP alongside the new track "The Answer."

John Connolly (Guitar) and Vince Hornsby (bass guitar) are half of the side project Projected. Combined with Tremonti guitarist Eric Friedman and Alter Bridge drummer Scott "Flip" Phillips, the quartet has released two albums: 'Human' in 2012 and the double-disc album 'Ignite My Insanity' in 2017.

It's hard to look at each band member's various musical side projects and not believe that these experiences have had a significant positive impact on Sevendust's continued development over the years. If anything, the band's latest album, 'Blood & Stone,' could be the perfect culmination of these all of these elements. As a celebration of both the past and the present, 'Blood & Stone' combines the influences of the band's early musical efforts such as 'Animosity' with the band's finest releases of the last decade. The result is a collection of songs of experience that could only be crafted by a road-chiselled act, making for a truly complete experience for all Sevendust fans.

07. Nothing Left To See Here Anymore

Last month, Sevendust played its first-ever show via livestream "Sevendust: Live In Your Living Room" — their only show of 2020. The event took place on October 23 to tie in with the release of the band's 13th studio album, 'Blood & Stone.'

To follow up on the success of October's show, the band has just revealed they'll be playing their 2001 record 'Animosity' in its entirety on January 8, 2021, in the form of another livestream set. Featuring the classic tracks "Angel's Son," "Praise" and "Shine," the nearly 56-minute third effort from the five-piece is packed with 7D fan-favourites.

As the veteran hard rock outfit prepares to play the remaining ten tracks off the RIAA gold-certified record, the band also revealed that they'd dish out all of 'Animosity' "and then some," leaving the opportunity for some additional surprises.

Tickets for the show, which will be broadcast by OPAV in Orlando, Florida, are available now.